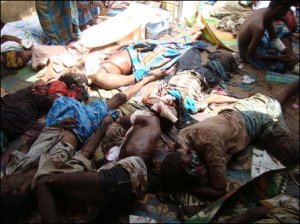 In Geneva the UNHRC discussed a very funny joke: the Sri Lankan government doesn’t want to listen to its own recommendations.

Of course the tragedy of the Tamil people is not about that. The UN ( even the UN!) realized that something of heinous magnitude happened in Sri Lanka. In their report, it is alleged that 40 000 civilians died. And these are the conservative figures of the UN.

The government agent for Mullaitivu Imelda Sukumar testified for the LLRC that the population under her control in January 2009 was 360 000.

When the Tamil civilians started to reach the Sri Lankan army after the defeat of the LTTE in May, the official figures were 280 000.

Even a UN official can realize that there are 80 000 missing. If you visit and talk to the survivors, they will tell you of a carnage.

When in May 2009 the Tamils in the Nandikadal Lagoon and opened fire, what they were expecting? It is a fact that in that area there were more than 300 000, so many come out. When you are bombing with heavy shelling a strip of beach with that multitude of children, elderly and women, the casualties cannot be but enormous.

The Western countries have no interest in dealing with this serious subject because they have a biggest concern in other issues. India needs to exercise its sphere of influence on Sri Lanka, including the economic exploitation of its position and side. The oil exploration in the Mannar Basin is benefitting Indian companies, which are listed in London, so the UK is mild against real pressure on Colombo. Besides, London sells weapon to Sri Lanka and has no intention of losing a client. Similarly France is just entering the oil scene in Sri Lanka and had already paid its fee (allowing the murder in Paris of LTTE leader Parithi). But also the Tamil leadership has some responsibility: they keep on hanging accountability and justice to the causes of Eelam. They don’t really ask for justice, unless is coming with independence. And of course nobody at present has the minimal intention to give them a new state. So it is really nobody’s intention to discuss what really happened in Sri Lanka.

Let’s talk instead of LLRC and its implementation; this is really a topic, which will bring no harm to anybody. You have a case of genocide and in Geneva your discussion is about LLRC. Sad.

Tamil civilians were massacred by the Sri Lankan attacks