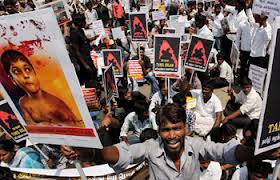 Recent history showed that it is very difficult to try bloody leaders when they lose the war: Saddam Hussein was sentenced to death, Milosevic was tried, but died before the verdict, Gaddafi killed in a summary execution. Only Charles Taylor has been convicted and for crimes committed in Sierra Leone, not his own (Liberia). Bashir in Sudan could be the next one, but with strong opposition from the Arab countries. As you can see, it is almost impossible to put on trial state leaders. And these had lost the war, they were on the wrong side. Croatian leaders with very similar responsibilities of Milosevic haven’t been even mentioned; Kosovar gangs of criminals have been rewarded with independence. It goes without saying that misconduct, abuses and tortures committed in Iraq and Afghanistan are out of the agenda. 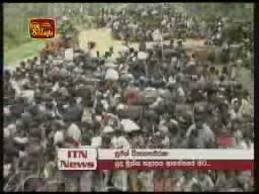 So the idea of starting such a process in Sri Lanka is remote, very remote. Further on it is very clear that the chain of command points straight to the top: President Rajapaksa and his brother Gotabaya.

More than 80 000 Tamils have been massacred; the army targeted civilians on such a scale, that mass graves are visible from the satellite[1].  And the government was talking of a “zero civilians casualties policy”. You wouldn’t expect from the Rajapaksa administration an outspoken confession; but from US and Europe a more resolute stance to bring justice and accountability.

Rajapaksa won the war and is winning also the post-conflict. I’m convinced that war crimes have been committed: only independent investigations could verify this claim. Given the procedures currently on-going in Geneva, we have almost the certainty that a war crimes case against Sri Lanka will never take place. 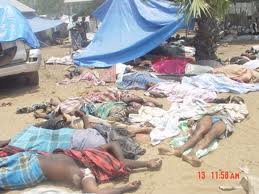 More than 80 000 Tamil civilians are missing from the last assault in the Nandikadal lagoon, where the people have been bombarded by heavy artillery.

It is talking for stake in Mozambique’s Rovuma-1 gas field, is gazing 1 million barrels of crude oil in Ghana, has sent its special envoy in Sudan, has planned to boost investment in oil sector in Venezuela. Who is it? A little help: it is an Asian country with more than 1 billion people. And no, it is not China.

India’s growth is probably less spectacular and iconic than China’s, yet the magnitude is similar. And so it is its thirst for natural resources. China is scary, instead India has the reassuring smile of a Santa Klaus Mohamon Singh, it’s the biggest democracy, no Bollywood villain can seriously be taken as a menace. 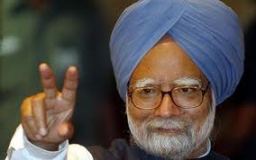 India has a friendly face. The worst it can happen with India is that they will start to dance and to sing in falsetto. Yet, New Delhi needs natural resources, desperately. In particular, oil. Loads of oil. India in 2011 consumed a third of the oil of China, but China produced also a third1. China imports almost half of its need, India almost all2. And the future could be even more unbalanced for New Delhi. It is fair to say that India is looking as ravenously as China for new oil sources.

As we mentioned in the introduction India was in talks over the stake in Mozambique’s Rovuma-1 gas field3, with Ghana about equity participation and industrial collaboration4 and also for a contract of more than 1 million barrels5, has sent a special envoy in Sudan6 with the clear mandate of lobbying for India in the competition with China over the Sudanese oil; finally, it is investing in Venezuela more than $ 2 billions7. 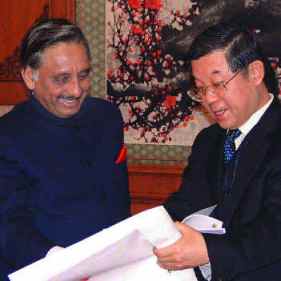 This competition with China is not new. In 2006 they signed an agreement to stop such a bidding war that was driving up prices worldwide8. In 2012 in a very unnoticed press release, they “agreed to “work together to maintain peace and stability of the Asia-Pacific region”. The “consensus” was reached during the recent visit of the Chinese defence minister General Liang Guanglie to India, the first such visit since 1976.”9 Few months earlier their race for the assets in the Western Hemisphere attracted some attention by the analyst10.

India and China will maintain internal stability only with massive growth, which in turns will be possible only through a constant, reliable access to natural resources. The human cost for this race will be enormous. In India the group Vedanta launched a para-military campaing with the support of the New Delhi (“operation Green Hunt”) to evict the Adivasi11 people from the mining site.

India is looking everywhere for new possibilities. So it was very welcomed news when they discovered fields at home in Gujarat12, the Andhra Pradesh13 and the Cauvery Basin14. Since 1981 presence of oil on the Indian side of the Basin were confirmed15. 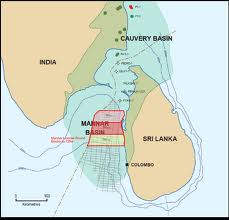 Cairn India was awarded the contract for oil exploration in block No.2 of the Mannar Basin and has signed a petroleum resources agreement with the government of Sri Lanka.

So it was only a matter of time before they found oil on the Sri Lankan one. Indeed. In 2011 Cairn launched a press release where they announced the oil discovery16.

If you consider that the Sri Lankan government in 2006 assigned one block each to China and India for further exploration, then you’ll have a more complete framework of the Chinese and Indian interests in Sri Lanka17.

When it comes to natural resources and their appropriation in countries with conflict issues and violations of human rights, you may easily accuse the role of China, as it is the case in Sudan. Well, we suggest that India, with a much lower profile, has very similar interests and very similar doing. China didn’t export wars, as the US did. We would like to broad the debate about conflict and natural resources also to India. 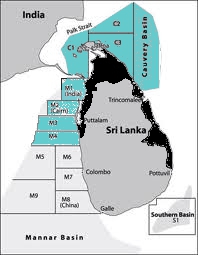 Map of Sri Lanka.
In Blue the areas interested by oil exploration.
In Black areas previously under the control of LTTE.

11The Adivasi are the Indian aborigenes, Estimated in 80 millions. 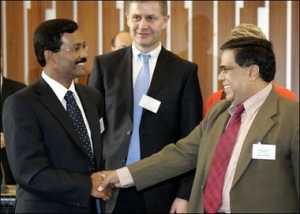 In 2001 Norway brokered a truce between the Sri Lankan government and the separatist army of LTTE. The mission of the Nordic country is to negotiate with the parties. In an interview with BBC, the Norwegian envoy Mr Solheim justified the efforts of his country out of pure compassion: “Security policy for the 21st century: if you want a peaceful Norway, you need a peaceful world.” A a safer place for our children.1

It is our evil nature to investigate the good deeds and we discover a coincidence: the very same year a Norwegian company, TGS-Nopec started seismic survey in the Mannar Basin in search of oil. From 2001 to 2006, the company amassed very promising data. The press release are nothing less than enthusiastic. 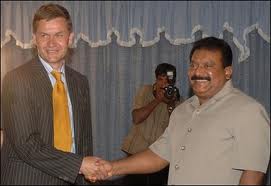 We don’t want to draw unnecessary conclusions. In scientific thinking you need to be very careful of two facts happening in the same time. Imposing causality or correlation could be in the eyes of the beholder. We see a strong effort by Norway to support the independence claim of a group of rebels. It is important to distinguish between LTTE and Tamil nationalism. The legitimacy of Tamil independence is not the subject. The debate concerns the fairness of giving such support to an organization that committed many heinous crimes. The Sri Lankan state is equally responsible of atrocities, with aggravating circumstances of being a governmental entity. The point is that Norway made a bold decision.

At the same time it is important to recall that Norway is a powerhouse in offshore drilling, with a first class expertise in the field. The Mannar Basin in Sri Lanka presents matchable conditions.

The peace process run in parallel with the oil exploration. And when the peace talks collapsed, so did the survey campaign. 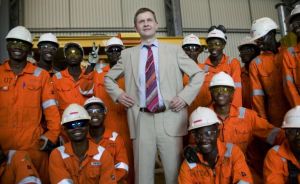 Erik Solheim with workers of the oil sector

Erik Solheim, the man sent by Norway to negotiate the peace, was first a special envoy. In 2005 he was promoted Minister for International Development, with responsibility of leading the Oil for Development program, Norad2. In this job he visited Ghana3 Sudan4, Angola5 with the clear purpose of consulting, advising, lobbying the oil sector for Norway. The Norwegian model of development is one of the most advanced, ethical and sustainable, so they are giving recommendations from a fair perspective. Yet, they are advising also on their own interest, to promote the Norwegian oil industry. This is the game of a governmental organization and it is neither good, nor bad. If your actions will cause harm, it will be negative. Positive otherwise. 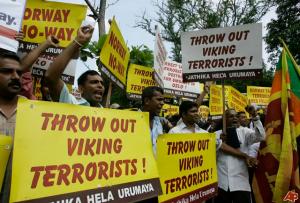 The only anomaly in this series is the role of Sri Lanka: the Norwegian envoy is clearly working with an agenda driven by oil. But in Sri Lanka they allegedly acted as mere neutral observers with a only humanitarian purpose. I’m sure that Norway is advocating transparency and good practices in all the countries it is visiting in its oil for development programme. Therefore I’m sure that they welcome this insight about this activity,they forget to mention. An accidental omission. I consider this quite important for two reasons. First: was the role of Norway dispassionate? Were they working to bring peace amongst Sinhalese and Tamils or their priority was to get their hands on the oil? Their strategy to support the Tamil separatism was for the good of the Tamils or just to have a privileged partnership with a newly created state, which owned everything to them?

The second is that oil is a factor in Sri Lanka. Maybe it is only a secondary one. Yet nobody is discussing it. In the case of Norway, oil probably played a big part. Then it is our duty to investigate more about the connection of oil in the Mannar Basin with the IV Eelam War. Follow us and remember: you heard here for the first time. 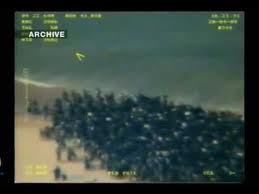