More than 80000 Tamil civilians were killed during the last attacks of the Sri Lankan civil war.

One may be tempted to say that it is not the first case of impunity, not even in recent history. True: in Syria for example there are concurrent narratives of propaganda blaming alternatively the government and the rebels. But the novelty in respect of Sri Lanka is the absence of competitive perspectives. It is well known that China protects Sri Lanka; a little less divulged is the Indian protection of Sri Lanka. But the real point is that the West is actually not interested in accusing Sri Lanka. The US made very bland recommendations to Colombo, in comparison what is at stake. The impression is that the Sri Lankan government shall be charged for mishandling the behaviour of its troops. The boys went too far in certain circumstances, but we don’t have the political will to scold our naughty soldiers.

The accusation is far from this insipid criticism: the government of Sri Lanka launched a heavy military offensive against hundreds of thousands of civilians. Again, it’s better to have clear in mind that we are not speaking of isolated episodes: the plan was to bring war in the middle of Tamil inhabited areas. The operation was designed to bring havoc in every Tamil house. At the peak of the Vanni operation, almost half a million of people has been chased, starved and bombed out. It is less about the casualties and more about the intentions. The carnage of 80000 civilians is still not the most horrible part of the truth. Soldiers massively brainwashed and put under extreme psychological stress, can eventually go crazy and out of control. This is still criminal and to blame. But the Sri Lankan case is worst: the government planned to massacre the civilians. We are not discussing episodes of crossfire: we are accusing the government of Sri Lanka of heavy shelling on harmless population. Repetitively. It was a decision, it was planned.

The silence of the United Nations is a crucial accomplice in the massacres.

And the United Nations, the government of USA, UK, India, France, Norway and Japan know what happened. The UN actually published a report where it estimates at 40000 the number of civilian casualties[1]. Moreover an internal inquiry from the UN provided even more critical observations about the accomplice negligence[2].

New Delhi provided military intelligence, electronic surveillance and field support on the ground: India was informed in real time. Actually, it was New Delhi that was informing Colombo about the development of action.

Now such carnage won’t be sanctioned.

Why? Several reasons for the convenience of geopolitical equilibrium. We have some suspicions that the oil discovery in the LTTE[3] controlled area could have been a game changer, especially for India (with Vedanta and Cairn) and European countries, like the UK (again with Cairn and Vedanta, both London-listed), France (with Total); but also Malaysia, with its powerful Tamil presence, was involved through Petronas[4].

The estimated reserves of the Mannar Basin oil field are up to a billion barrels.

Aside this allegation, the undisputed outcome is that Sri Lanka will walk away from a planned massacre with total impunity, because it made the right diplomatic move. Namely, it sought agreement with every power involved. With the US, Colombo justified the operation with war on terror (it was actually a civil war). With China, it sold out a port facility (to be included in the String of Pearls). With the other Sri Lanka exchanged attractive economic deals (the exploration rights have been ceded at bargaining price). In fact during the final phase of the war, the duo Kouchner-Miliband improvised a timid protest[5], but already in 2011 France was pledging support to Sri Lanka[6] (in 2012 Paris collaborated with Sri Lankan secret service in the extra-judiciary killing of an Ex-LTTE member Parithi[7] and in 2013 Total is ready to join the Mannar Basin deal[8]), while UK was deeply compromised with Colombo for arm trade (see the scandal that led to the resignation of Defence minister Liam Fox[9]) and economic interest (Cameron lobbied in favour of Cairn and Vedanta with Indian government[10]).

This episode will establish an important precedent in international jurisprudence: heavy diplomacy with all the parties, with all the regional and global powers will give you clearance on everything you do. Everything. 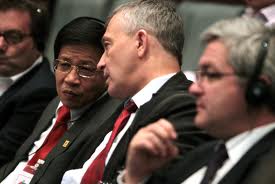 On the 7th of March 2013 Sri Lanka’s government held an international road show to facilitate the bidding process for the offshore exploration rights for several blocks[1], locations: Houston, London, Singapore.

It may be interesting to note two facts: in this round there is almost a unanimous interest: Exxon, Total, Eni, BP, Gazprom, Petronas[2].

This enthusiasm probably derives from the successful operations of Cairn-Vedanta. The Anglo-Indian company in 2011 found oil.

This leads to the second interesting fact: the previous road show was held in 2007[3], same locations (Houston, London, Singapore). Did anybody hear about the Eelam War? It ended quite bad for the LTTE, the separatist army, which was annihilated and also for more than 360 000 Tamil civilians, chased out like wild animals. More than 80 000 civilians are supposed to have died in the final stage of the conflict. Well, in 2007 the war had just re-started. Not a surprise that the bidders were a bit more cautious. 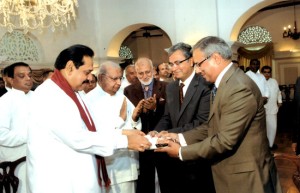 In fact the LTTE was one of the best trained, motivated and fierce liberation army in the world, with an exceptional navy. During the civil war, the LTTE navy, the Sea Tigers have been able to evenly match the Sri Lankan one. The region controlled by the Tamil Tigers was run like a state, with banks and post offices. And it was rely heavenly on sea supply lane. So it was vital for the LTTE to have a successful protection from the sea. Then in 2007 India started patrolling. India’s position has been ambiguous, to say the least, with the LTTE.

But in 2007 the idea of buying exploration rights in war zone was simply mad. Unless the government pledged beyond any reasonable the certainty of the deal…

How can you guarantee such agreement during a conflict?

Probably you planned carefully to eliminate any resistance, any dissent. And with 1 billion barrels of oil, you can buy international support and help. 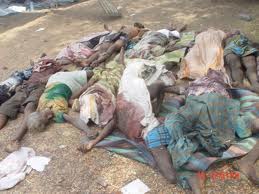 Malaysia is home of a numerous and influential Tamil community. Much of the Indian part of the population comes from Tamil Nadu and Sri Lanka.

The LTTE was quite active in the South East, especially Singapore and Kuala Lumpur precisely for this friendly support. Still today the Tamil community is extremely vocal in bringing justice to the war crimes committed in 2009. In Malaysia there are several members of parliament, activists, businessmen passionate for the cause. Some results of this lobbying can be seen in the Malaysian attempts to look into the case1.

The Tamil community in Kuala Lumpur is very active in promoting events, conference and meeting to mobilize and to sensitize public opinion and government. Their effort aims to insert in the regional agenda this subject.

So far Malaysia has been quite reluctant to take a stance. But the ruling party will face elections soon and there is no better way to captivate the strategical Indian vote, than pleasing this community with a strong campaign in favour of justice and accountability.

But Sri Lanka started to court Petronas2. Colombo invited the Malaysian company to explore the Mannar Basin where oil has been found by the Indian company Cairn in 20113.

Executives from Petronas showed interest in the proposal and it seems they are ready to sign a Memorandum of Understanding for further activity4.

If it will be proved that Sri Lanka has commercially viable oil reserves, what will it be the position of Tamils in Malaysia? All their activity could simply vanish like snow in the sun. This could be a test for the capability of the Tamil community to engage the public.

If they act promptly they still have some chances to address in their favour Malaysian business policy. But if they wait until the deal is sealed, it is very unlikely that negotiations will be re-opened.

Probably the intervention of the Tamil diaspora is driven almost entirely by ideology and it can become self-referential and limited in its action to the community itself. More attention to the business and economic decisions surrounding the cause would be helpful in shaping public opinion in relevant matters.