The upcoming UNHRC will very likely vote a resolution against Sri Lanka. The US had made clear it is a procedural on and we can expect India to align itself with the Western countries. What does it mean? Absolutely nothing. This is the masterpiece of diplomacy by US, Europe and India, to support the criminal regime of Sri Lanka. In fact all this manoeuvring in Geneva, all this supposed actions against Sri Lanka, in reality are nothing. The 2013 resolution will be merely procedural: it means it won’t bring any novel fact, only it will require to implement the 2012 resolution. It is the case that 2012 resolution, the big betrayal of India against Sri Lanka, was in fact another joke. In 2012 the US sponsored resolution asked the government to implement the LLRC. Now, LLRC was the recommendations for the government by a committee nominated by the government. As you can image, the most serious allegations and issues weren’t touched even marginally: the LLRC was a toothless instrument. 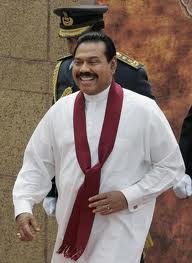 The focus on LLRC is a diplomatic mirror to elude the reality of fact: the US, Europe and India can confront Sri Lanka on that irrelevant field. Sri Lanka will respond, UN will make more pressure, finally they will find a compromise. Everybody is happy, the West shows it has forgot Sri Lanka, India can say that they fight for the Tamils on the international stage and Colombo can cry on this fake diplomatic defeat.

Can we remind ourselves that the problem in Sri Lanka is not burocracy, or the implementation of a recommendations made by the government to itself, but the serious allegation of war crimes and genocide.

Can someone tell the Tamil diaspora that fighting these risible battles doesn’t make any difference? That if you “defeat” Rajapaksa on this, you are actually losing? Rajapaksa will accept this pressure after long negotiations: do you know that after such compromise, you can’t start to ask something else immediately?

You will win the Geneva vote in 2013 and that will have zero consequence in the process of accountability and even less in the protection of the Tamils in Sri Lanka now.