At present it is difficult to condemn the perpetrators of 2009 crimes. Three main reasons for that: first geopolitical, China clearly backs up in the security council and any enforcement from the United Nations is deemed to fail. Second, India silently but effectively supports Rajapaksa and has no intention to mine his grip on power. The third reason is theoretical: it is not advisable to charge with such accusation the chief of a State democratically elected. He may be guilty, but it raises a problem of opportunity, because the person also represents the executive power of his country. It is very complicated to start a trial in this conditions with a potential undesirable outcome: should he be condemned, how can a foreign judicial force impose its authority on the internal matters of a sovereign state?

It is not a surprise that even if the governments in the international community are well aware of what happened (see the Wikileaks’ report about the US ambassador in Colombo), it is arduous to implement any step in that direction, under the present circumstances. When Rajapaksa won’t be in office anymore, then concrete moves towards an international accountability can be taken. How long it will last and how fair is to wait for that moment in respect of the victims, is a hard and legitimate question. 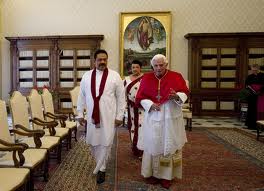 But we are faced with even more problematic issues now. In June 2012 president Rajapaksa has been invited by the Queen to attend the Diamond Jubilee (to be fair, he wans’t the only desputable presence: the monarchs of Baharain, Saudi Arabia were invited after bloody repression of public protest). Few days later he met the Pope in Rome. More recently it has been discussed his presence during the Olympics. At the end he didn’t show up, but the issue stands and the problem is the international role of President Rajapaksa.

Precisione for the reason we stated earlier, it’s complicated to judge the chief of the executive power, while in office. But contrary to the image of confidence that he is keen to project, he is aware of walking on the edge. His position is delicate; surely time is on his side, the more it passes the greater the chances to relegate to history the judgement of the war crimes.

But the threat is there. This is the reason for Mr Rajapaksa to seize any opportunity of international visibility. The media exposure that accompanies any politician, in his case has an even more literal meaning of survival. In fact any time he is photographed and associated with other head of state, like in the case of the queen or the pope, he is scoring more points in his favour. The queen and the pope, pretty much like anybody else, know very well what happened. And yet, accepting his presence his a subtle, implicit endorsement of his legitimacy. Now, he is without any doubt the legitimate head of state of Sri Lanka. But his government is patently guilty of crimes against humanity.

Clearly will be more than an embarrassment for the queen and the pope, an eventual condemnation of Rajapaksa. Will they say they didn’t know? They were misinformed? So, on side, just his presence is an active, implicit endorsement of his policy.

Now we are coming to the episode related to the Olympics. As we speculated, Mr. Rajapaksa desperately needs to participate in this international events. The Independent few days before the inauguration of the Olympics, considered highly probable his presence. A public outcry and the Tamil diaspora machine already in move stopped him. Subsequentely in article of the Island, clearly delivering a governmental message, was mocking the reaction of the Tamil community. I think that the reality is different. Rajapaksa is struggling to participate, but his presence wasn’t considered appropriate. I think his presence is not appropriate anywhere, until proper and fair accountability of those facts will be delivered.